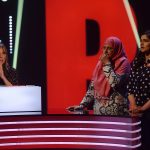 In the lead up to Cannes, All3Media International has expanded its third-party formatsline-up.

Letterbox is a half-hour format that challenges parts of contestants to go head-to-head to crack a series of passwords in an attempt to take home a prize. It airs on BBC Two in the UK.

Miss Wildcard sees female celebrities enter specialised pageant competitions as a Wild Card contestant. It was developed for Sky1 in Germany. Producer South&Browse became part of the All3Media stable over the summer.

Other shows coming to MIPCOM include Panda Television’s Partners in Rhyme and Wedding Day Winners.

“The expansion of our portfolio via partnerships with format experts such as Hindsight, South&Browse and Panda Television ensures that we can bring a wide variety of the best new ideas to our international clients, and deliver a slate that caters to diverse tastes and scheduling requirements,” said All3 International senior VP of format production Nick Smith.

Portillo’s show will be joined at the event by BBC Pandemic, a science cross-platform experiment which will ask the population to participate in a study via the BBC Pandemic App. The results will be revealed in a 90-minute documentary to air in spring 2018 on BBC Four.

Futher titles include the docs World’s Forgotten Army, The Hole in the Ozone Layer, 90 minute film The British Garden: Life and Death on Your Lawn and the special Secrets of the Pyramids.

“We’re bringing a rich slate of Argonon and third-party content to MIPCOM 2017 – from the very exciting medical experiment BBC Pandemic from producer 360 to The Hole in the Ozone Layer from Windfall – where we learn how President Ronald Reagan became the world’s most unlikely eco-warrior,” says Cecilie Olsen, SVP of sales at Argonon International.