People in the five biggest European markets watched an average of three hours and 48 minutes per day in the first half of the year, according to Eurodata TV Worldwide.

Presenting the findings of its latest ‘4-screen TV audience’ report in London this morning, Eurodata analysts said that while the TV remains the preferred screen for viewing programmes, the internet has enjoyed growing success in TV media consumption.

This is especially true among young people, with young adults across France, Germany, the UK, Spain and Italy spending just two hours and one minute watching TV per day in the first half of the year, against the total three hour, 48 minute average.

In France, computers now represent 52% of online TV programming consumption, while smartphones led the way for youth-oriented channels like W9. Tablets were found to be the number one device in France for watching TV online between 6am and 7am.

“In the major European countries, watching television programmes on the internet is becoming general practice and it can represent a substantial additional audience for certain content, such as targeted fictional content or youth entertainment,” said Frederic Vaulpre, vice-president of Eurodata TV worldwide. 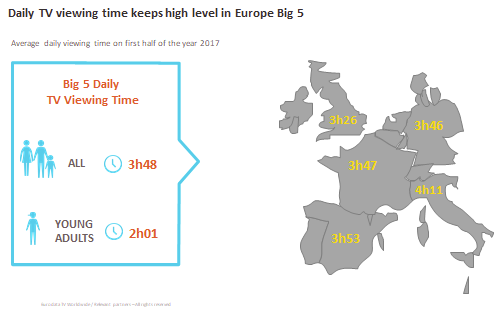 Looking at the evolution of TV average viewing times from 2012 to 2017, Vaulpre said that “the US and UK have seen a regular decrease in daily consumption, with respectively a loss of 11 [percentage] points and 15 points.” However, he said that in France and Germany consumption remains quite high and has stayed roughly level over the five year period.

According to the research, the shift to online viewing has produced some benefits. Shows like French daily soap Demain Nous Appartient, which airs on TF1, has experienced an uplift of 35% when you add live viewers to those watching on-demand, on catch-up and across screens. For youth-skewing show Les Marseillais, which airs on W9, the boost was 79%.