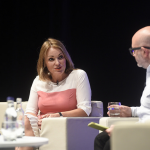 Many international execs descended on Scotland’s capital this week for the annual get-together, the Edinburgh International Television Festival.

Outgoing Channel 4 chief creative officer Jay Hunt was effusive when questioned about her next move on Wednesday.

On suggestions she is about to take a new role at Netflix, she replied during her last ‘Meet the Controller’ session: “Am I?” There is, in fact, no immediate news on her next move, as the search for her replacement continues.

UK terrestrial Channel 4 has been searching for a successor since former Shine CEO Alex Mahon was announced as the network’s new chief exec, but various names such as Zai Bennett and Ben Frow have ruled themselves out. Former ITV digital channels chief Angela Jain and Hunt’s deputy, Ralph Lee, are thought thought to be in picture.

BBC One revealed it was bringing Steve Coogan’s alter-ego, Alan partridge, back to the channel. A 25th anniversary special will air this year before a full series launches in 2017. The channel also unveiled hard hitting docs Grenfell and The Stephen Lawrence Story (WT), factual drama The Barking Murders, legal thriller The Victim, psychological thriller The Cry, gameshow format The Button and a number of shows

Amazon Prime Video India went into production on a trio of reality shows: Jestination Unknown, The Remix and Comic Kaun

Broadcasters including Seven in Australia and NHK in Japan have bought Diana: Her Story from distributor Scorpion TV as docs about the late British royal to drive business

Science Channel in the US was among buyers of Impossible Engineering season three, which Twofour Rights sells

Viceland is launching new dating show Hungry Heart with Action Bronson on August 30, and is developing a new daily late night show with hipster cook Bronson. The channel is also working up a third season of FTD