‘SVOD to dominate free’ in Lat Am 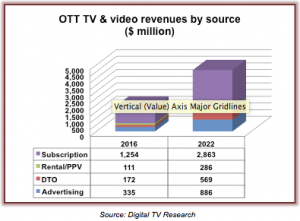 The overall picture for OTT services in the region is overwhelmingly positive, Digital TV Research’s stats suggest, with the US$1.86 billion taken from the medium last year set to more than double.

Digital TV Research described the pan-regionals as “adding a competitive edge to the SVOD sector”.

Netflix will remain the largest pan-regional, though it will only take half of all subs, compared to 62% in 2016.

Amazon, Mexico-based Blim and Claro Video are all set for growth, with HBO Go and Crackle doing from miniscule figures in 2016 to around one million subs by 2022.

The Latin America OTT TV and Video Forecasts also predicts the region to have 32.54 million SVOD subscribers by 2022, which is nearly double the 17.08 million recorded at the end of the 2016.

Brazil will account for the most, with 34% of subs, followed by Mexico with 28%.