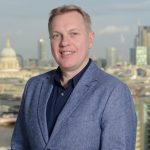 The newly created post will see the formats-focused exec overseeing ITVS businesses across the Nordic region.

The MDs of these companies now report to Beale (pictured), who will continue to lead ITVS’s global formats strategy. This part of the role sees him working with ITVS prodcos internationally to exploit the firm’s vast non-scripted catalogue.

“Exploiting our formats around the world is central to our strategy and Mike will continue to spearhead this important business, building on the fantastic growth him and his team have already achieved,” said ITV Studios International president Maria Kyriacou.

Beale has been with the production and distribution arm of UK broadcaster ITV since 2011, having previously been VP of international television production at NBCUniversal.

He had initially joined as director of international formats before being upped to executive VP of global development and formats last year.

Beale is a co-founder of ITV-owned 12 Yard Productions, and worked as head of the now-defunct Alchemy Reality.

Kyriacou said his experience would be “a vital resource for our brilliant Nordics businesses as they grow in their individual markets and, under Mike’s leadership, work in tandem to make the most of the shared opportunities the region offers”.

In March, ITVS posted revenue of nearly £1.4 billion (US$1.8 billion), which highlighted the growing importance of international business on ITV.