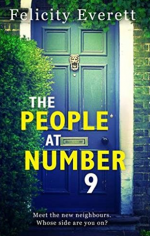 Lionsgate Television UK has announced two new scripted development projects with publishers Harper Collins and Myriad Editions – The People at Number 9 and The Other Side. Lionsgate will produce both series and sell global rights.

The People at Number 9 is published by Harper Collins and written by Felicity Everett. Commenting, Steve November, creative director, Lionsgate UK Television said: “Felicity’s novel is a brilliantly incisive and acerbic view of families and friendships, vanities and vulnerabilities; the smallest actions have the biggest consequences for these real, recognisable, flawed people and we are delighted to be adapting it for TV.”

Everett added, “From the moment it’s published, a book belongs to its readers as much as its author and their take is always fascinating, so to see this story told in a whole new format, interpreted by a team with such a brilliant track record will be like being inside the head of a reader who is enjoying your book, and I can’t think of anywhere I’d rather be.”

“In Joe Agnetti, Stephen has created a huge character, an antihero who takes us with him on every step of his journey through love, betrayal, guilt, confession and redemption, keeping us on the edge of our seat whilst never losing his sense of humour.

Candida Lacey, publishing director of Myriad Editions, said: “Stephen came to our attention through Myriad’s annual work-in-progress competition, First Drafts. His 5,000-word extract was selected for the shortlist from over 2000 entries. The judges, including bestselling crime writers Peter James, Elizabeth Haynes and Elly Griffiths, were all impressed by the authenticity of Stephen’s writing and his compelling storytelling. The Other Side will make cutting-edge television and bring Stephen’s work to the global audience it deserves.”