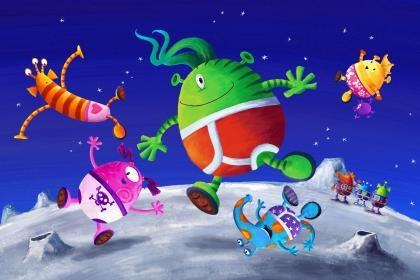 Endemol Shine-owned Tiger Aspect (Mr Bean, Charlie and Lola) is adapting award-winning children’s book Aliens Love Underpants AND… into a 12 x 2 minute animation series for Sky. The show, to be labeled as a Sky Original Production, will be available exclusively to Sky and the Sky Kids app, and is part of a concerted push into kids by the European PayTV giant.

Each episode will feature the aliens singing and dancing along to hilarious songs about cupcakes, spaceships, gobbledegook and more. With madcap lyrics and dance moves to join in with, the show is aimed at kids aged three to six. “As a parent, I know how much kids love the fun silly songs that they repeat again and again (and again!),” said Tom Beattie, head of animation and kids, Tiger Aspect: “We’re looking forward to making our own, using the cast of beloved aliens from the world that (book authors) Claire (Freedman) and Ben (Cort) have created.”

Aliens Love Underpants AND… joins a line up of kids’ programmes on Sky that also includes Bear Behaving Badly, Big Block Singsong and Miniteve, a series of educational short-form videos. It also follows the production of other Sky originals such as Morph and Big Cats: Wild Files. Lucy Murphy, head of kids content, Sky, said: “At Sky, we have the very best range of entertainment for kids and their families. We are thrilled to be working with Tiger Aspect to bring Aliens Love Underpants to rowdy life, and to be adding great British comedy from Darrall Macqueen, and mesmerising mini-docs from Miniteve.”