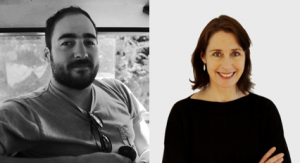 The addition of Oliver Good and Isabelle Pavitt comes as Antenna secures its first commission, a 1x60mins doc for Channel 4 Education titled Just Not My Type (WT).

Over the past three years, Good has worked at Nerd’s offices in London, New York and California on everything from feature films to documentaries. He recently produced US cable net Fusion’s rhino poaching series Animal Mafia.

Pavitt will be head of production, a role she held at Dead Behind Bars prodco Lambent.

There she also oversaw production of shows such as Channel 5’s Pet Hoarders and BBC Four’s The Camera that Changed the World, and was in charge of distribution, finances and business and legal affairs.

“Oliver is one of the best ideas people around and has an equally strong track record in the US and the UK, while Isabelle has a rare ability to problem solve ambitious production plans and deliver on bold new formats,” said Lee, Antenna’s creative director.

“They’re the perfect team to build and deliver the slate of distinctive formats and series we want to be making.”

Antenna’s debut doc, Just Not My Type, will see social historian and broadcaster Emma Dabiri exploring modern dating and asking if young Britons are unwittingly more racist than ever before.