All3 targets US acquisitions with Becker move

All3Media has hatched a plan to expand its portfolio of production companies in the US. 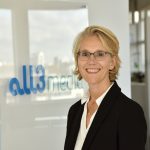 The production and sales giant’s stateside arm, All3Media America, has brought Carly Becker on board as VP of corporate development.

The company is describing Becker’s relocation from All3’s London headquarters to LA as a “clear indication” of an intention to buy firms in the US.

Becker has been with All3 for four years, working on deals to bring Fleabag prodco Two Brothers Pictures into the All3 fold, and on investments in factual and drama firm Two Halves Pictures and digital start-up Little Dot Studios.

She will now evaluate “potential investment opportunities” in the States as part of a wider growth strategy.

“Carly has played an important role in the corporate development team in All3Media, and she has worked on deals ranging from the acquisition of the group by Liberty Global and Discovery to more recent start-ups and acquisitions,” said All3Media CEO Jane Turton (pictured).

“Her contribution has been of huge value and having her based in Los Angeles is a sign that we are now concentrating hard on building the US business.”

“With our robust roster of international companies, the addition of Carly to our Los Angeles team couldn’t come at a more opportune time,” said All3 America CEO Greg Lipstone and COO Dan Donahue in a joint statement.

“We are looking forward to working with her as we continue to actively pursue corporate development deals in the US.”

Lipstone, a former Hollywood agent, became All3 America CEO in December 2015, with Donahue reuniting with his former ICM Partners colleague in February this year.

All3Media America was established in 2012 and currently comprises the US arms of All3 prodcos such as Maverick, MME and Studio Lambert. It also established Main Event Media in January.

The All3-backed Studio Ramsay, meanwhile, yesterday saw its foodie series Culinary Genius, which has run on ITV in the UK, picked up for adaptation by Fox. A local version will run on various Fox stations weekdays for an initial three weeks from August 7.