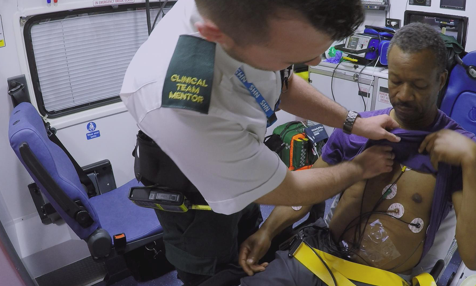 The prodco of ex-Leopard Films execs Jacqueline Hewer and Nicki Gottlieb has signed a first-look deal with UK-based distributor DRG.

This comes after DRG secured similar rep deals with Thoroughly Good Media (Heston’s Dinner in Space), Magnum Media (Duck Quacks Don’t Echo) and Screen Glue (March of the Dinosaurs) in the past year.

Brown Bob is behind Channel 4’s 3x60mins Paul Merton’s Secret Stations and W’s Inside the Ambulance (pictured), both in the UK.

New commissions with British broadcasters will soon be announced, with others in “advanced development”, according to the company.

Gottlieb, Brown Bob’s managing director, said the company was attracted to DRG, in part, due to its size. “It is small enough to care and the team is always accessible, but it is also big enough to make a meaningful investment in us and our content.

“We are now confidant that with DRG’s financial and creative backing, as well as its extensive knowledge of the international TV market, Brown Bob will quickly go from strength to strength, delivering broad-based factual content and formats that will succeed in the UK, as well as with broadcasters overseas.”

DRG senior VP of acquisitions Katy Cundall said Brown Bog had been a target “for some time”.

“Such volume is very attractive to broadcasters – and us as a distributor – and it demonstrates Brown Bob’s ability to fully explore and extend ideas, telling rich, multi-layered stories.”

Hewer and Gottlieb left their respective roles as head of daytime and head of production at UK-based Leopard in 2013 to launch Brown Bob.

That came after Leopard merged with Remedy Productions to form the Argonon Group, which now comprises various prodcos in the UK and North America.