Viacom18 has upped a key exec and shuffled various others in an organisational rejig.

The TV18 and Viacom joint venture runs a host of channels in India including the popular Colors service. 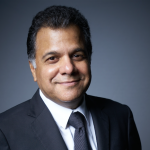 Palia and Poddar will both report to Raj Nayak.

The changes come as Viacoom restructures and repositions its US and international business under the leadership of Bob Bakish.

Other key execs in the Indian operation include

Nina Elavia Jaipuria, who is head of the group’s kids nets, Gaurav Ghandi, who runs digital, and Ajit Andhare, who runs motion pictures. All of these execs will continue to report to Sudhanshu Vats (right), group CEO, Viacom18.

“Today, Viacom18 has five diverse lines of business – in addition to a core broadcast offering it now has a strong presence in digital, filmed and live entertainment along with a fast-growing licensing and merchandising operation,” Vats said.

“None of this would have been possible without our most valuable asset – our team. This new structure will power us as we enter our next growth phase.”