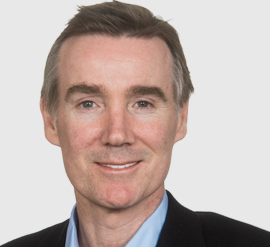 The ITV boss leaves at end-June. Bazalgette said this morning: “Adam has been talking to me and the board for some time now about his future plans.

“He has made a fantastic contribution to ITV and the board is deeply indebted to him for his strong leadership and personal dedication in very successfully turning around the business and building a more global and diversified organisation with real scale in key creative markets around the world.”

Crozier replaced Michael Grade in 2010 and implemented a turnaround plan at the broadcaster although it faces a tough period because of Brexit and sports costs, according to a recent analyst report.

The broadcaster’s international division has grown throughout Crozier’s tenure with a raft of production entities added to the ITV Studios group, which has performed well, partly alleviating Brexit concerns.

Bazalgette hailed the financial performance of ITV under Crozier, noting revenues have grown by over a billion pounds, and EBITA profit increased over three-fold.

“It’s been an absolute privilege to lead the transformation of ITV over the past seven years and I know that I will miss this great business and the people who work here,” Crozier said. “However, having spent 21 years as a chief executive across four very different industries, I now feel that the time is right for me to move to the next stage of my career and to build a portfolio of roles across the PLC and private sectors.”

Crozier recently took non-exec positions at Costa and Whitbread fuelling rumours of an exit from ITV, and Bazalgette was reported in January to have brought in recruiters to find a new exec to run the UK’s largest commercial broadcaster.

Crozier said: “I’m incredibly proud of what we’ve achieved in turning ITV into one of the most successful and dynamic media and content businesses in the world. All the credit for that achievement goes to the fantastic teams of people working right across ITV.

“Today ITV is more robust, well balanced and stronger both creatively and financially than ever before, and is well placed for the digital future. I wish the company every continued success.”

Crozier’s exit had been mooted with several reports suggesting Ian Griffiths was also set to leave the broadcaster having joined in 2008. With the value of the pound down after Brexit, many analysts and commentators expect ITV to be the subject of a takeover approach by a larger media group, with its biggest shareholder, Liberty Global, one name continually linked to a deal.