If you work in television and happen to be in Brussels this week, chances are you are attending the Cable Congress conference, where the likes of Amazon, MTG and Liberty Global are scheduled to address the crowd. 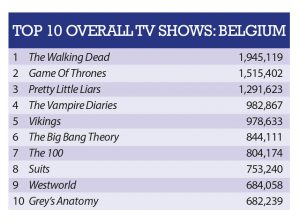 Our latest stats, from Cable Congress 2017’s home, Belgium, show the that for the second time in a row, linear-originated programming is outweighing digital rivals in terms of demand expressions.

As with our results from Turkey, The Walking Dead is clearly the most in-demand programme in Belgium. The zombie apocalypse drama is well into its seventh season and the 1.95 million average demand expressions it took were well ahead of Game of Thrones in second place (1.52 million).

Also aping the Turkish numbers from two weeks ago, not one digitally-produced original took enough demand to disturb the top ten. This means series such as Grey’s Anatomy, Suits, The 100 and The Vampire Diaries are outscoring Orange is the New Black, Stranger Things, The Grand Tour and House of Cards. 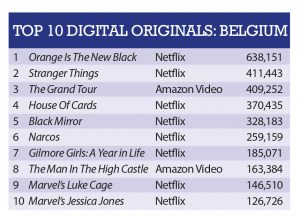 Whether our tables from Belgium and Turkey point to a wider trend in European demand is not yet clear, but make for nice reading if you are working for a linear broadcaster.

In the UK over January, Amazon Prime Video’s petrol-head factual entertainment series The Grand Tour beat The Walking Dead into second place, suggesting the battle for influence isn’t quite over yet.

The Grand Tour can only muster a third-placed finish in our Belgian digital chart, narrowly behind Netflix’s sci-fi drama Stranger Things (409,252 vs 411,443) and trailing OITNB (638,151) by some distance.

Gilmore Girls: A Year in the Life makes its first appearance in some time in the digital chart, coming in seventh behind Narcos and ahead of The Man in the High Castle, which is one of two Amazon originals to chart.

Tags: Game of Thrones, Orange is the New Black, The Walking Dead