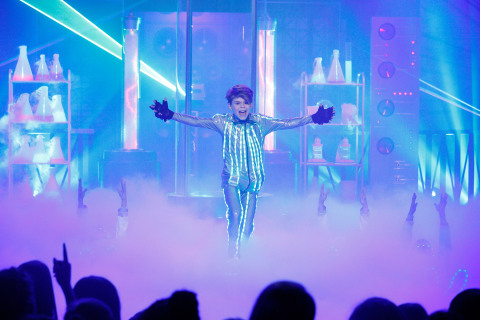 Nickelodeon is taking the kids to the Lip Sync Battle arena with a spin-off of the popular Spike format.

Lip Sync Battle Shorties is a half-hour, ten-part series, and will go into production later this, the Viacom network revealed at its latest upfront presentation in New York City.

This comes after an hour-long special of the same name was a ratings success in December, posting more than two million viewers (Live+7) and more than 20 million views on the Nickelodeon YouTube channel.

Spike’s original Lip Sync Battle sees pairs of celebrities face off against each other in choreographed performances in front of a live audience. The kids version will feature three talented children per episodes, a Shorties Dance Crew and a soon-to-be-named host.

Lip Sync Battle has been one of the biggest-selling formats on the international market since its launch at MIPTV two years ago.

“Lip Sync Battle Shorties is so illustrative of how kids have changed,” said Cyma Zarghami, president, Nickelodeon Group. “Our research tells us this generation believes they are all one step away from being famous. This show celebrates real kids with real talent, but more importantly a passion to perform and the confidence to do it.”

Elsewhere in the upfront, Zarghami revealed Nick had lined up another version of the Teenage Mutant Ninja Turtles franchise, which will comprise 26, 2D-animated episodes.

Rise of the Teenage Mutant Ninja Turtles (WT) follows the eponymous reptile heroes as they battle new villains and discover a world beneath the streets of New York.

The current incarnation of the show will remain on the network, with the latest season set to premiere on Sunday, March 19 at 9am.

Another kids TV franchise, Henry Danger, is also being rebooted. The Adventures of Kid Danger and Captain Man (WT) will take live-action characters from the original into the animated world.

Henry Danger creator Dan Schneider is behind the ten-episode series, which Powerhouse Animation is producing.

Powerhouse previously created an animated short-form series based on Henry Danger, which has reached more than 30 million views worldwide across platforms.

“We are giving the characters that kids love, the opportunity to play in fresh new ways,” said Zarghami in her first upfront since the establishment of the standalone Nickelodeon Group and the exit of programming chief Russell Hicks last year.

“Animating Dan Schneider’s incredible Henry Danger, while keeping the voices of the current series, signals to the audience that we are working hard to serve them on all platforms.”

The love-action Henry Danger is heading into a fourth season.

Nick has also signed social media personality JoJo Siwa to an overall talent deal. She will work on original programming, social media, live events, consumer products and music, and a docu-style special (currently untitled) has been greenlit, following Siwa as she embarks on a new journey with help of Nick friends.

Overall, Nickelodeon claims a content pipeline of more than 700 episodes of new and returning series across preschool, animation and live-action.