Snapchat allows content companies to reach young viewers in a way that other social and video platforms cannot do with comedy, horror and sport among the key programming genres. 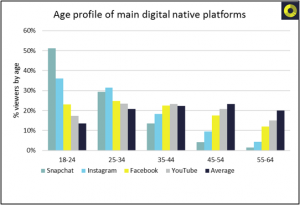 New research from Ampere Analysis shows that Snapchat delivers a young audience that want to engage with content on mobile devices. It is better at reaching young viewers than Facebook or YouTube, Ampere concludes, with those services having a broader audience.

As well as comedy, horror and sport, other key genres include gameshows and romance, the research house says. News and factual programming, meanwhile, are less popular among Snapchat users than the wider viewing population.

Producers wanting to reach Snapchat video users need to adapt their skills and content to allow for the fact that most viewing takes place on mobile.

“Addressing the ubiquity of the smartphone, and the ‘snacking’ nature of much of digital native viewing will be key for content creators,” says Guy Bisson research director at Ampere.

“This can be as simple as looking to vertical video formats that better fit the mobile screen, but increasingly it will also be about looking for ways to monetise the specific formats that social-media-driven video offers such as live streaming.

The research adds that while younger viewers have ‘fallen out of love with sports content on traditional and pay TV’ Snapchat and Twitter prove there is still significant appetite for sport programming on new video platforms.

“The provision of live sports streams on Twitter is a great example of giving the younger audience what they want in a place they want to see it,” Bisson said.