The children’s series mark the first YouTube Red series produced specifically for family audiences and are due to debut starting from this spring. 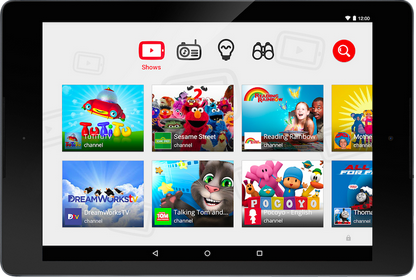 YouTube announced the new series yesterday, at the same time as it revealed engagement stats for YouTube Kids app.

YouTube claimed that since launching two years ago its Kids app has now clocked up more than 30 billion views, with more than 8 million active viewers tuning in each week.

It also said that the YouTube Kids app will be available “soon” to download on internet-connected TVs from LG and Samsung.

The four new original series are: Hyperlinked, a tween story about five girls who create a website for other girls; DanTDM Creates A Big Scene, about a group of animated friends who are touring “an epic show”; The King of Atlantis, an animated series about two young monarchs in the underwater city of Atlantis; and Fruit Ninja: Frenzy Force, about four fruit ninjas who set up a juice stand as a front for “the messiest secret service in the world”.

“From engaging new shows to being able to watch in your living room, our second birthday is shaping up to be a memorable one. We’re looking forward to all the other new things 2017 will bring,” said YouTube’s global head of family and learning, Malik Ducard.