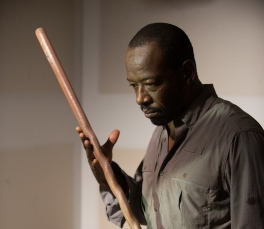 James (pictured in The Walking Dead) has written and created drama Gone, which will be directed by Nick Murphy (The Last Kingdom) and produced by UK-based Line of Duty prodco World Productions.

Set on an East London housing estate, it features James as a violent street hustler who gets the chance to make amends with his past when he is accused of crime.

Suranne Jones (Doctor Foster, Scott and Bailey), and Stephen Graham (Boardwalk Empire, This is England) also star in the series. It will be executive produced by Simon Heath and Jessica Sykes, and Sky Vision, the salea arm of 21st Century Fox-backed European pay TV giant Sky, will handle international distribution.

The new six-part instalment, written by Emilia Di Girolamo (Law and Order: UK), is set in Europe amidst hysteria about the refugee crisis, an increasing threat of terrorism, and the rise of far right groups.

Head of drama for Sky Anne Mensah said: “The multi-talented Lennie James has mixed a gripping mystery with utterly unique characters. Gone exemplifies the originality we aim for on Sky Atlantic. In The Tunnel: Vengeance we return to our incomparable English and French detective duo, Karl and Elise, examining questions which politically couldn’t be more pertinent.”

Both dramas are commissioned by Mensah and Zai Bennett, director of programming for Sky UK and Ireland.