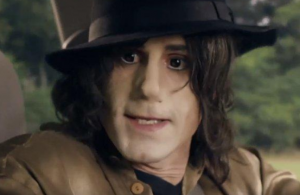 The episode is titled ‘Elizabeth, Michael and Marlon’, and features actor Fiennes playing Jackson on a road trip across the US, but was condemned on social media by the singer’s daughter, Paris Jackson, and nephew, Taj Jackson.

Paris Jackson claimed Fiennes’ portrayal “honestly made me want to vomit”, and was critical of Channing’s performance as Taylor, who is Jackson’s godmother.

European pay TV operator Sky released a statement, saying: “We have taken the decision not to broadcast ‘Elizabeth, Michael and Marlon,’ a half-hour episode from the Sky Arts Urban Myths series, in light of the concerns expressed by Michael Jackson’s immediate family.

“We set out to take a light-hearted look at reportedly true events and never intended to cause any offence. Joseph Fiennes fully supports our decision.”

Other episodes in the series feature pastiches of Adolf Hitler, Samuel Beckett, wrestler Andre the Giant, Muhammad Ali, The Sex Pistols, Cary Grant, Bob Dylan, Salvador Dali and Alice Cooper. A variety of prodcos are producing the standalone episodes, which debut this month.