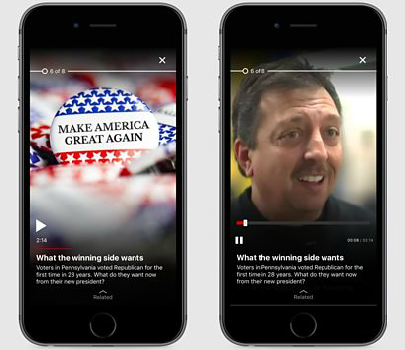 The BBC has updated its popular news app, introducing new elements including allowing users to swipe through the day’s new stories.

The UK pubcaster said that 60% of BBC News’ digital traffic comes from mobile, with 7am and 10pm the peak viewing times. The app has 7.6 million unique users each month.

The latest update, which will be rolled out within weeks, is part of an ongoing BBC initiative called Project Newstream to optimise the Corporation’s video news output to mobile.

“Video remains the best way we tell our broadcast journalism, but the storytelling needs to be available to the smartphone generation too,” said James Montgomery, digital development director for BBC News said.

In related news the BBC has added a new seasonal element to its CBeebies Playtime Island app for pre-schoolers. An online advent calendar will offer users a daily new mini-game, themed around shows on the CBeebies TV channel, in the run-up to Christmas.

Kay Benbow, controller of CBeebies, said: “Our advent calendar will give little users a gift every day in the build up to the Christmas, spreading some Christmas cheer with their favourite CBeebies friends.”