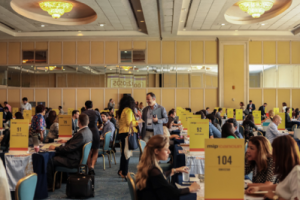 The attendance numbers were up 70% according to Reed, which also noted delegates from 46 countries were at the Mexican market.

Reed organises meetings between buyers and sellers at the event, and said 3,700 were set up at this year’s event.

There was also an expanded conference line-up, with new strands examining digital developments throughout Latin America, with Manuel Abud, president and CEO of Azteca America; Jon Zepp, head of content partnerships at YouTube Americas; and Cris Abrego, chairman of Endemol Shine Americas among the speakers.

“This marketplace was originally established to allow content owners to have one-to-one meetings with Latin American TV buyers, but has expanded to include a broader cross section of programming, production and digital executives in this region,” said Ted Baracos, director of market development at Reed Midem..

“We doubled attendance in the second year and we’ve grown now by more than 70% to include all the major channels in the region while maintaining the intimate format that MIP Cancun participants really love.”