Perhaps it’s indicative of a wider global narrative, but dystopian drama is the top genre in Iberia. The Walking Dead’s grim survival tale tops the overall charts in Spain and Portugal, while Charlie Brooker’s futuristic anti-fables in Black Mirror are the winning digital originals. 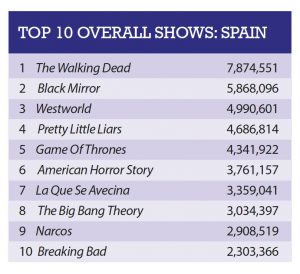 The Walking Dead’s status as the most-watched US cable series is cemented by its performance in Spain, where its 7.87 million average demand expressions were two million views ahead of Black Mirror, which is by far the most popular digital series in the territory.

Westworld, which has consistently making headlines for HBO since its launch, was third with five million, followed by Pretty Little Liars, Game of Thrones and American Horror Story.

Telecinco’s comedy La Que Se Avencina, which has been one of Spain’s top performing series since its launch nearly ten years ago, is the only local production in the top ten. It is ahead of The Big Bang Theory, Netflix’s Narcos and Breaking Bad, marking a rare charting appearance for the Bryan Cranston-starring drug drama. 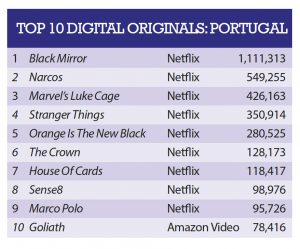 In Portugal, the overall one-two is the same as its neighbour, with The Walking Dead’s 1.28 million just pipping Black Mirror’s 1.11 million. Pretty Little Liars, Westworld and Gilmore Girls round out the top five.

There are no local productions elsewhere in the chart, with American imports Grey’s Anatomy, Game of Thrones, The Flash, The Big Bang Theory and How to Get Away With Murder rounding out the top ten.

For digital originals, the House of Tomorrow-produced Black Mirror, formerly of UK broadcaster Channel 4 and now SVOD platform Netflix, has pulled way ahead of its rivals in Iberia.

Transparent is the only non-Netflix series in the chart.

In Portugal, Black Mirror’s demand expression average, 1.11 million, is more than double that of second-placed Narcos. Luke Cage is third, followed by Stranger Things, Orange is the New Black and The Crown. Again, only one Amazon (and non-Netflix) series features, with Goliath in tenth.

Spanish-language content has been in the news in the past week with the second MIP Cancun event taking place in Mexico.