There’s no debating: The Walking Dead rules supreme across Europe. Four of our five charts show it out ahead of the competition, with only new Sky original The Young Pope breaking the trend in Italy (hardly surprisingly considering the Jude Law series was conceived and produced in the territory).

Below we look in-depth at the charts in the UK, Germany, Italy, Norway and Poland… 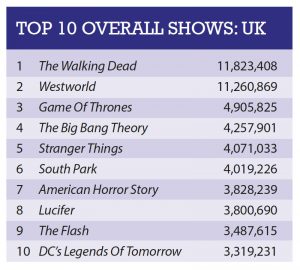 Stranger Things is the territory’s most-popular digital original, 1.23 million ahead of Luke Cage in second (2.84 million). The Crown has begun decently with 1.83 million, though some may think the all-encompassing Netflix marketing campaign should have led to a chart-topping performance.

Haters Back Off, the Netflix comedy, is fourth with 1.66 million, while another new Netflix UK original, Black Mirror, limps in with 1.44 million in sixth place. Perhaps the switch from former linear network Channel 4 to a subscription on-demand platform has had a detrimental effect on its numbers.

The Man in the High Castle is once again the only Amazon Prime Video original in the top ten, coming in at ten with 832,555.

Over in Germany, The Walking Dead is trending way ahead of the competition. It look an average demand expression total of 15.83 million, more than double the 7.78 million the second-placed Big Bang Theory could muster. Game of Thrones took another third place with 7.77 million and Pretty Little Liars was fourth with 7.64 million.

Other notable shows placing include The Daily Show with Trevor Noah, which airs on Comedy Central Deutschland (fifth with 6.2 million), The Bold and the Beautiful (seventh, 5.97 million) and Westworld (ninth, 4.26 million).

The highest rated digital original, Black Mirror, does not make the overall top ten. The 3.11 million average demand expressions it commands, however, is enough to push House of Cards (2.44 million) into second place.

The Man in the High Castle is again the only non-Netflix series in the digital top ten (766,688 demands being good enough for seventh place).

The Young Pope has been christened the most in-demand original show in Italy. The Sky-produced drama about a young but conservative American pontiff beat The Walking

Dead by a margin of just under two million (9.47 million versus 7.5 million), backing up its stellar local ratings.

The Crown makes another appearance, while 11.22.63 was the only non-Netflix title on the digital list.

The Walking Dead’s margin of victory in the overall chart was not as pronounced in Norway as some of the larger territories polled this week. However, it was still more than 60,000 demands ahead of Pretty Little Liars, taking an overall average demand score of 531,177. 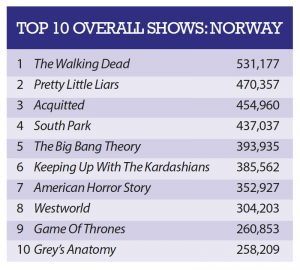 There was some indication of the pull of local content, with pubcaster TV2’s Acquitted coming in third with 454,906. That’s not entirely unexpected – the FremantleMedia International-distributed noir became Norway’s biggest ever television launch last year with 660,000 viewers, and was the top trending topic in Norway that March evening.

South Park makes an appearance in fourth (437,037). The presence of Keeping Up with the Kardashians (sixth, 385,562), meanwhile, shows Norwegian audiences have an ongoing predilection for reality TV.

Digital demand is significantly lower than that for linear shows in Norway, underlining the strength of traditional channels. Luke Cage is the top digital original with just 144,802, more than 110,000 down on the tenth place overall finisher, Grey’s Anatomy. The digital chart is largely predictably except for Amazon Studios’ new legal drama Goliath.

Game of Thrones has been the most popular series overall this year, topping our charts on various occasions. However, its star has fallen slightly in recent months, as there have been no new episodes since the end of June.

That makes it all the more impressive that it trailed The Walking Dead by just over 234,000 average demand expressions (5.06 million plays 4.82 million).

Westworld is third with 3.16 million, with American Horror Story next (3.15 million). Black Mirror makes another appearance in the top ten (eighth place, 2.34 million).

On the digital front, Narcos takes its only first place for this week, its 2.71 million average also placing it sixth overall.

While most of the top ten are familiar, animated Netflix series All Hail King Julien (ninth, 344,784) and CGI toon DreamWorks Dragons (tenth, 299,301) have managed the reach the list. 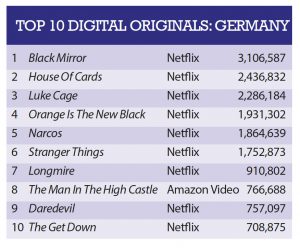 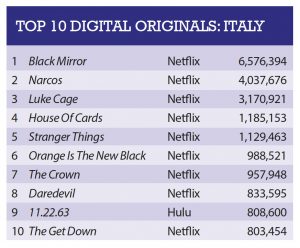 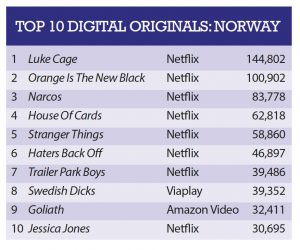 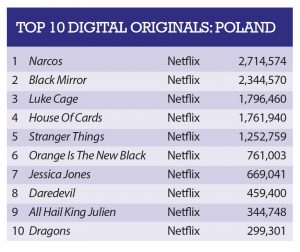