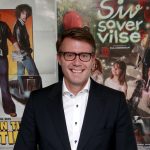 Porseryd (pictured) was CEO of Endemol Nordics, but left after the merger of Endemol and Shine Group at the turn of 2015, which resulted in the creation of Endemol Shine Nordics.

At Bonnier-owned SF, he will replace Jonas Fors, who left in disgrace this summer after damaging allegations over company conduct at the Cannes Film Festival.

Porseryd joins the near-100-year-old studio, which produces high-end film and television drama for Nordic and international markets, early next year.

He is credited for launching Endemol’s Nordic business in 2010, having left another Scandi prodco, Metronome, in 2009 after Shine Group paid US$88 million to buy the business.

“Michael has a long, solid and well documented experience in the industry, including production and the acquisition of film and TV rights,” said Ulrika Saxon, Bonnier’s representative on the board of directors of SF Studios.

“I’m convinced that he, together with the SF Studios team and partners in the Swedish and Nordic film community, has what it takes to continue to build and develop SF Studios into Europe’s most exciting film studio.”

Porseryd will take over as CEO from Frida Westerberg, who has been interim chief executive since Fors’ exit. She will return to her previous role as deputy CEO and COO.