IHS Markit predicts the €3 billion mark will be reached before 2017 as services such as Netflix, Amazon Prime Video and Now TV expand their offers and attract new customers.

“When Netflix launched in the UK, total consumer spending on SVOD in western Europe more than doubled to €307.6 million in 2012. By the end of 2014, that figure had more than trebled to €1.1 billion due to Netflix’s European expansion and the launch of Amazon Prime in the UK, Germany and Austria.”

IHS predicted that year-on-year growth will slow was key markets reach maturation between now and 2020, but that “even this slower increase in value generated from SVOD will be sufficient to make the platform the largest in terms of total home video spending”.

The UK will remain the “standout market” in western Europe, according to the research, with a forecast of more than €1 billion in consumer spending by year-end 2017. The territory will retain its current 35% share of totalmarket spend through to 2020.

This year will represent a strong year for SVOD in Italy and Spain as it is the first full year of Netflix operations in both. Spending in Spain will grow 124% to €59.9 million, while Italy will be up 112% year-on-year at €94.7 million. By 2020, the pair will makeup a combined 11% of the total.

Meanwhile, smaller markets have outperformed neighbouring countries. These include the Nordic quartet of Sweden, Norway, Denmark and Finland, plus Belgium, the Netherlands and Switzerland.

“These smaller individual markets are relatively affluent, but they do generate disproportionately significant consumer spending from the much smaller populations from which they can draw SVOD subscribers,” Loeffler said.

Norwegians are predicted to spend a total of €239.6 million on SVOD by year-end 2016, with that figure increasing to €318.3 million by 2020, putting it on par with both Spain and Italy – markets that have approximately four times as many broadband households. The Netherlands and Belgium, meanwhile, currently make up 10% of all SVOD spending in western Europe.

IHS said the Nordic and Benelux regions had “both benefited from early Netflix launches and in many ways were primed for legitimate SVoD consumption”.

“Nordic consumers have shown strong demand for online consumption of video content going back to 2006, while those in Benelux already had a strong tradition of both transactional and subscription TV-based video-on-demand,” it added.

“In both regions, digital subscription is a continuation of a long-established digital video consumer habit, which was supported early on by strong broadband infrastructure.” 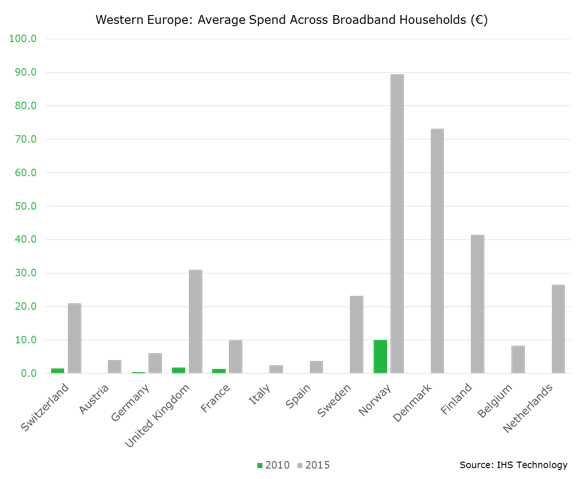