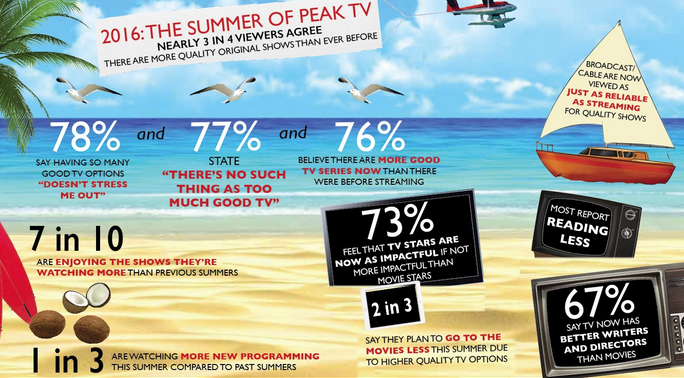 Most consumers believe 2016 will mark the ‘summer of peak TV’, but that the saturation of series on television is no bad thing, according to a study.

Some 73% of respondents to a Miner & Co. Studio study agreed 2016 was ‘the summer of peak TV’, with more quality content released than ever before, with 77% also believing there was no such thing as “too much” good TV.

FX Networks president John Landgraf coined the term ‘peak TV’ in reference to what he sees as an over-saturation of the scripted television market.

He has consistently pointed to internal FX research that showed well over 400 new series launched last year, and predicted this year or next will represent a production peak.

Many other industry watchers and sources forecast fatigue will soon set in, if supply overwhelms demand. However, the new study, which New York-based industry insights firm Miner & Co. conducted, showed 78% said having so many options did not “stress them out”.

Furthermore, respondents showed a general belief TV was becoming better on all platforms: 87% of streaming and cable series and 86% of broadcast shows were deemed “very” or “somewhat” reliable as sources of great content.

Other findings showed the peak TV phenomena had made their lives more enjoyable, with 69% saying they were enjoying this year’s television more than previous summers. Over 33% had watched new programming, with that rising to 50% for the millennial demographic. Fifty-per-cent are watching more original series on streaming services.

“For the past few years, streaming has drowned out conversations about broadcast and cable – and it continues to gain strength as a preferred platform for viewing,” said Robert Miner, president of Miner & Co. “But investment in quality scripted content has, at least for now, captured viewers’ attention across all options – broadcast, cable and streaming.

“The choice, convenience and control streaming offers will continue to hold very high appeal, but content is key – essentially in attracting and retaining viewers.

“So, peak TV isn’t just a benefit for the TV audience, [as] the greater investment in quality scripted shows is the key to survival for broadcast, cable and streaming content providers.”

The study was conducted to the backdrop of the notion that the industry and consumers are part of a ‘golden age of television’, which had in large part replaced independent cinema as the first point of call for complex, stylised screen-storytelling.

Indeed, 66% of respondents said they planned to go to the moves less this summer due to the number of high quality TV series. Seventy-three-per-cent believe TV stars are now as impactful as their film counterparts, while 67% said TV now has better writers and directors.

However, Richard Broughton from Ampere Analysis told TBI that “the volume of content hasn’t necessarily had an effect on cinemas”.

“We looked into the impact of the release of high value original shows on theatrical attendance in the USA, and could not prove there was any significant effect,” he said of separate Ampere work.

“With viewing so flexible now it appears that consumers are able to go to the movies and also watch the shows they want at a time of their choosing – there doesn’t necessarily have to be the direct trade-off.”

Most respondents to the study also said they were reading fewer books as a result of the TV on offer.

Ampere’s Broughton added that while there was “some truth” to the idea of a drama bubble”, demand was still increasing.

“Consumers are increasingly bingeing – both because they can, due to on-demand availability of shows, and because the content is compelling enough to keep them hooked,” he added.

“The majority of consumers in western Europe and North America indicate that they binge-view, according to our research, and this is backed up by consumption statistics: the average Netflix account streams two hours of content per day.”

The Miner & Co. online survey polled 801 male and female TV viewers between the ages of 18 and 59 between July 1-6. Conductor Miner & Co. offers insight solutions to networks such as AMC, BBC America, Comedy Central and HBO, and streaming platforms including Seeso.