Analysis of new programmes launched by genre round the world shows that the level of original entertainment, factual and fact-ent shows is on the rise. TBI digs into the stats with Eurodata

Of the 8,500 new programmes launched by channels last year, just over half were original creations.

Although the 2015 sample was wider (44 countries) than the previous year’s, making a like-for-like comparison difficult, Estelle Chandèze, Médiamétrie/Eurodata TV Worldwide’s international research manager,  says that the overall volume of new shows is about the same, but the proportion of original programmes in that mix is up year-on-year.

“Last year, what we saw was that in production and distribution everyone was more risk averse, which meant there were more adaptations [formats] of existing shows and imports,” says Chandèze.

“But 2015 was also a year when we saw more ideas and more creativity, inspired by the rise of new technology.” 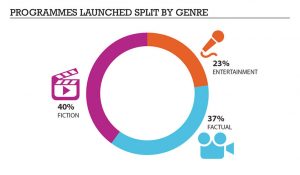 News and factual were key categories in terms of genres embracing new tech, and new ways to relay information, the Eurodata analyst says. While scripted remains a hot category of programming, last year also saw an increase in the volume of unscripted content.

“Drama is very important, but when we look at the evolution of programming trends in 2015 we can see entertainment was rising,” Chandèze says.

Eurodata groups programmes in three categories in its analysis: fiction; entertainment, which encompasses reality and gameshows; and factual, which comprises docs and other unscripted fare.

Of the new shows launched last year, fiction still led the way, accounting for 40% of the total. However, factual (37%), and entertainment (23%), each with a spread of shows that are formattable, accounted for a greater proportion when combined. Also, within those figures, most drama was acquired and/or imported, often from the US, with a higher degree of entirely new programme ideas coming from the entertainment and factual categories.

In drama, less than half the new shows launched last year were wholly new ideas, with perennial favourite scripted still getting first-time launches in numerous territories.

In entertainment, where ideas are generally cheaper to develop and produce than in drama, almost 23% of the new launches were wholly original. That total hits the 60% mark when the wider factual category is included.

The research clearly shows there is an uptick in investment in entertainment programming. “First of all this is explained by economics,” says Chandèze. “It is difficult in some countries to produce fiction, because entertainment is generally much cheaper.”

In a fragmented viewing environment, entertainment shows can also draw a broad audience and drive appointment viewing, especially those with live elements.

“Entertainment shows can be a way to make people come together around a screen,” Chandèze says. “They can be a way to create [televisual] events, and reinforce the links between people.

“Factual and entertainment tend to be more local; people like to see people from their own country,” she adds. “Maybe the time of original fiction is over and being replaced by original docs, magazine shows, talkshows and entertainment.”

In terms of the provenance of new shows, Eurodata’s research shows the US, South Korea and Japan were among the current entertainment hotspots.

The UK and Denmark were notable in terms of original factual and fact-ent production, while in scripted, India and China was at the top of the list, both creating a large volume of original content for their huge domestic audiences.

Nigeria, the centre of the Nollywood phenomena, and Turkey, which has emerged as a leading drama-creating nation, were also notable for creating a large volume of original drama.
“It is interesting because in fiction, you are seeing new territories emerge,” Chandèze says.

She adds that, globally, various parts of the world are notable for producing and developing programming in specific categories. “Different regions have different areas of expertise,” she says. “There is a new world map of content genres. In terms of entertainment, Asia is the fastest growing, while for fiction it is the Middle East, Africa and India. For factual [and fact-ent] it is still Europe.”