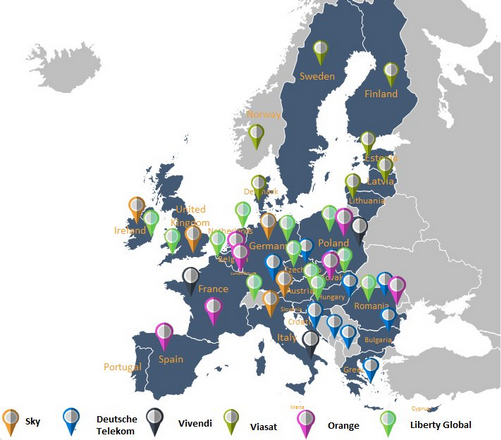 A group of 15 media giants dominate pay TV within the European Union, accounting for almost 70% of the bloc’s pay TV homes, according to new research.

The European Audiovisual Observatory reports that ownership is becoming more consolidated among this group as national players make expand beyond their domestic bases.

Deutsche Telekom, Liberty Global, Orange, Sky, Viasat and Vivendi are among the 15-strong group that dominates TV in the EU, and free TV specialists such as CME and RTL also feature.

“National distribution markets have become more concentrated between 2011 and 2014,” the EAO noted. “Alongside consolidation at the national level, the market has seen players expand their geographical scopes, acquire major national players, and increased cross consolidation between telecommunications and cable companies.”

The likes of Viasat and Vivendi are among the European entries. The latter has publicly called for European companies to back European platforms and service in the face of competition from the US and Asia with content chief Dominique Delport telling MIPTV delegates it was crucial in terms of diversity and cultural relevance.