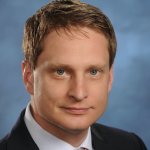 In May, TBI was first with the news Cornish (below right) would step down, with sources at the time saying Smyth (left) would step up to replace him.

The 21st Century Fox-owned distribution business has now confirmed senior VP of sales and development Smyth is to be upped to SVP and MD at TCFTVD.

He has been with Fox since 2009 and will remain in London in his new role. He will have overall responsibility for the firm’s day-to-day operations and expansion of relationships with broadcasters across Europe and Russia.

He will also work with TCFTVD production execs to develop coproduction opportunities for original content in the US and elsewhere.

Before TCFTVD, Smyth worked at UK pay TV provider Sky, another Fox company, where he held roles including head of acquisitions for Sky 1, and also worked as a media planner and scheduler for the BBC.

“David is a respected and accomplished executive who has more than 20 years of experience in the television industry. He has made tremendous contributions to the company since joining our London office,” said TCFTVD president, international television Marion Edwards.

“We are confident that under his leadership, our dedicated team in London will continue to expand our business efforts throughout some of the world’s most important territories.

Smyth paid tribute to the outgoing Cornish, who is well thought of throughout the international buying community, saying: “I will use my experience and build on the wonderful relationships we’ve developed over the years to grow our operations further.”