Latin American over-the-top video revenues will more than triple between 2015 and 2021, with this year to be seminal for the market, according to new research. 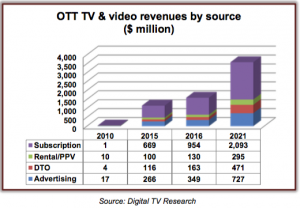 Subscription video-on-demand is predicted to remain the region’s largest OTT revenue source, contributing US$2.09 billion by 2021, some 58% of the total – up from “next to nothing in 2010”.

While the move towards SVOD services will “stifle the pay-per-view or rental market”, the research predicts that the OTT rental and pay-per-view revenues will still “expand rapidly”, climbing from US$100 million in 2015 to US$295 million 2021.

Advertising on OTT sites are also tipped to bring in US$727 million by 2021 – up from US$266 million in 2015. However, free-to-air catch-up viewing is “unlikely to be as prevalent” as is regions such as Europe.