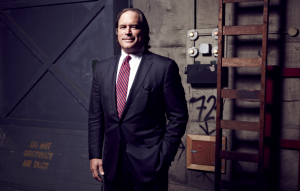 Sony Pictures Television boss Steve Mosko is leaving after more than two decades at the studio.

US trade Variety broke the news yesterday, and although Sony declined to comment, Mosko’s exit has now been widely reported in the US.

Variety, citing three sources, said Mosko was departing after failing to agree terms on a new contract, with his current deal up this year.

Deadline, meanwhile, said that the relationship between the SPT chief and his boss, Sony Pictures Entertainment chief Michael Lynton, was ‘frosty’.

The Sony exec was only upped at the studio last year, moving up from president to chairman of its TV division.

While the Sony movie business has endured some turbulent times, Mosko is credited with building the TV operation to a point where the focus at the studio has shifted from features to small screen production and distribution.

The Shield, Damages, Breaking Bad and The Blacklist all came through during Mosko’s tenure at SPT, which is unique among the Hollywood studios in not being affiliated to a US broadcaster.

Sony’s succession plans are not clear. Mosko oversees production, distribution and Sony’s international channels divisions, with speculation suggesting the bosses of these divisions will now report direct to Lynton.

Whether Sanford Panitch gets an expanded role has also been questioned. The former Fox exec joined Sony last year in the newly-created role of president of international film and television, working alongside Mosko on TV projects, as well as on the feature film side of the business.