Subscription VOD will become a billion dollar business in the Middle East and Africa in the next few years, according to new research.

Simon Murray, principal analyst at Digital TV Research, said: “Middle East and Africa OTT TV and video will still be an immature sector by 2021. However, 2016 is a watershed year – the year that OTT really started to take off.”

SVOD revenues will rocket from US$124 million last year to US$1.24 billion in 2021, according to Digital TV Research. 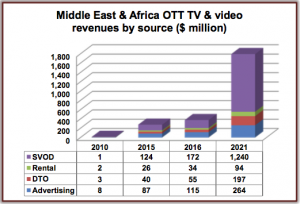 By that point there will be 19.6 million SVOD subs across the MEA region. That compares with the 2.8 million subs expected by end-2016.

The MEA on-demand market will develop differently to that in other parts of the world.

Digital TV Research said that “unlike western Europe, OTT TV and video advertising revenues will be limited in the Middle East and Africa as few free-to-air broadcasters have deep online archives”.

Murray added: “Fixed broadband penetration is low in many of the region’s countries, so more OTT viewing will take place on smartphones.

“Digital TV Research forecasts that 304 million smartphone subscribers will be watching OTT TV & video at least once a month by 2021 – more than triple the 2015 total and up from five million in 2010.”

In revenue terms, Turkey will be the biggest SVOD earning territory, ahead of South Africa and Israel.