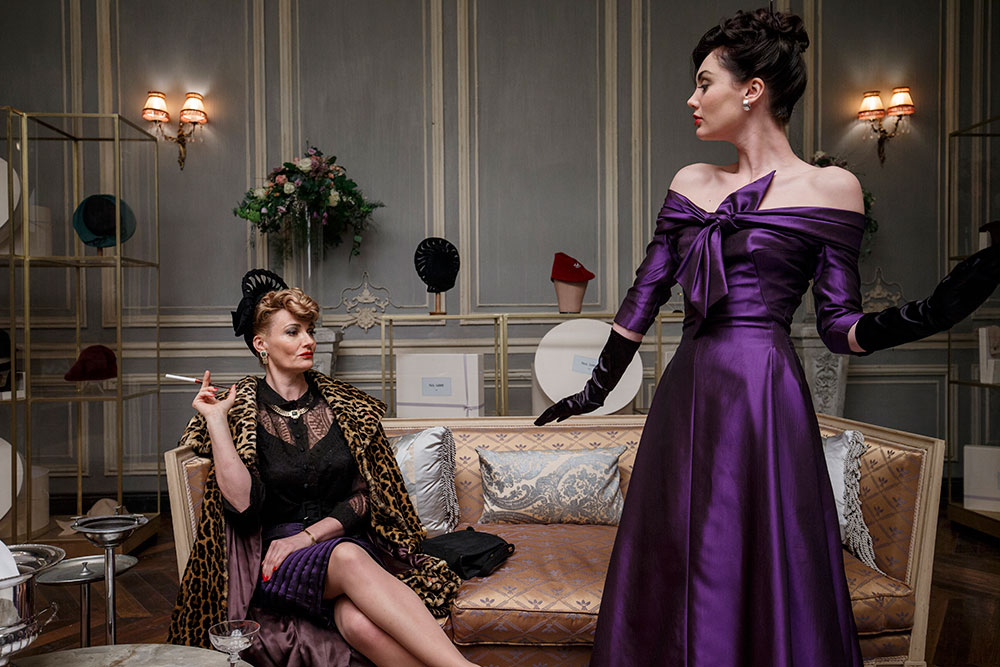 The Collection is on-trend, with big-ticket period dramas such as Versailles, War and Peace and Deutschland 83 remaining in vogue. This upcoming eight-parter is literally in fashion: it tells the story of an illustrious design house emerging from a re-energised Paris in the immediate aftermath of World War II.

Murderland scribe Kate Croft has a deal with War and Peace prodco Lookout Point, and through that worked up The Collection with Oliver Goldstick, the US writer behind another fashion-infused drama, Lipstick Jungle, which ran for two seasons on NBC in the US.

Amazon may be shy with viewing figures, but it is, Lookout Point’s Vaughan says, “a magnet for talent”. The show follows two brothers, Paul and Claude Sabine, played by Richard Coyle (Crossbones) and Tom Riley (Da Vinci’s Demons), as they build the new fashion business. The cast also includes Frances de la Tour (Vicious) as a ruthless matriarch, and Mamie Gummer (The Good Wife) as Paul’s American wife.

“When you talk to writers, you can tell if this is the thing they most want to do, and I could feel that level of passion and commitment with this,” says Lookout Point CEO Simon Vaughan. He adds that although the real-life emergence of post-war fashion houses informed the show, Croft and Goldstick have created a fictional family and business.

“It is inspired by Dior and Chanel, but is an original drama about fictional characters,” he says. “It is set against a world that is true to what it was, socially and politically. In part, it is a story about Paris, and we’re confident we have been true to that; France Télévisions, as France’s national broadcaster, wouldn’t have been involved unless it was authentic and legitimate.”

France Télévisions will air the show, which is being shot in English, on France 3. The channel has had some success with UK dramas, including  and Vera, and has recently acquired BBC drama Happy Valley and the ITV reboot of Maigret.

The French public broadcaster, through its in-house production division MFP, is one of many broadcasters around the world keen to become a coproducer of scale. This is the first project jointly led by  its international copro unit, headed by Médéric Albouy; France 3’s drama unit, managed by Anne Holmes and Pierre Merle; and Toma de Matteis at MFP.

Pascal Breton’s Federation Entertainment is the French production partner, with Breton and Anne Thomopoulos (Borgia) exec producers.
Goldstick, meanwhile, has a deep trough of US TV credits, including Ugly Betty, Desperate Housewives and Pretty Little Liars. Decamping to Wales, where The Collection is largely shot, was literally and figuratively a big move for the US scribe. “It was a departure for me, because I’m used to working in the US studio system,” he says.

The straight-to-series model appealled to Goldstick. “The whole attraction was doing a series rather than a pilot,” he says. “I’ve done hundreds of episodes of US television, but never had the luxury of writing all of the episodes in advance, because of the nature of the way things are done in the US.”

Though series was shot in Wales – Pinewood Wales is an investor in the project – as well as in Paris, director Dearbhla Walsh (Penny Dreadful) went to great lengths to ensure the look was right, according to Vaughan. “It’s not a cod approximation of Paris,” he says.

The fashion houses that became famous worldwide post-war were all aware of the potential of the market beyond their home territory, giving The Collection an inherent international appeal, Goldstick says. “The likes of Dior and Balenciaga knew that the new world was very important,” Goldstick says, “and there is something very American about this story; it’s an entrepreneurial fable about something that became an enormous success very quickly, and whether the family behind it can survive that.”

Goldstick, also the serie’s showrunner, says the period setting also adds to the dramatic possibilities, and the contrasts of high fashion and a city being rebuilt. “Fashion becomes a metaphor for survival and shows one way people reinvent themselves after the war,” he says.

Amazon made The Collection its first UK-originated original drama. The streaming service had, however, worked with Lookout Point and the BBC on Ripper Street, another period drama, albeit in a completely different genre – crime.

BBC Worldwide is an investor in Lookout Point and backs its projects. Liam Keelan, head of scripted at the commercial arm of the UK pubcaster, says it quickly saw the potential in The Collection.

“The competition for really high-end content is fiercer than ever,” he says, “so we feel the need to be involved at a very early stage, and we said this has got something that felt a bit special, and talked about a world that hasn’t really been seen. It felt distinctive in the market, and we saw it as a big-budget, returnable series.”

Amazon’s involvement makes the drama unusual for Worldwide, in that it did not have a traditional UK broadcaster, although UK rights are up for grabs after Amazon’s window. “It has been a new kind of project for us in that it didn’t have a traditional UK broadcaster, although we hope it will play in the UK [beyond Amazon],” Keelan says.

What the Amazon connection does mean is that the BBC Worldwide sales execs will not be heading into meetings armed with a raft of ratings data, viewing demos and the other traditional tools of the distribution trade – it is not even known how many subscribers Amazon has signed up to its subcription streaming service.

The flip-side is the algorithm-based commissioning favoured by Amazon – this isn’t one of its subscriber-reviewed pilots – means hard data exists somewhere that shows there is demand for this type of show.

“We don’t quite know how it will play out with [buyers] who might be interested in it after the Amazon window, we just have to trust in the quality of the writing and talent behind it,” says Keelan.

Should the series prove popular, there is then the material for new seasons for years to come, with Goldstick having a multi-season arc planned. With a MIPTV screening and dinner at the exclusive Château de la Napoule, with cast in attendance, buyers will soon decide whether they have designs on this year’s Collection. SVT in Sweden and DR in Denmark have today bought the show.