The special will be produced by Endemol Shine Group prodco Tigress, and follow Halls as he journeys to Africa on an expedition to track the annual sardine run, and the sharks that chase the smaller fish.

Halls and the team will track and scientifically analyse the sharks while film captures the little understood natural phenomenon.

The programme was commissioned by Discovery’s international VP of production and development Helen Hawken and will go out on the Discovery Channel in the this summer. Discovery said it will also transmit the show internationally.

Graham Lafferty, head of Discovery Channel UK and Ireland, said: “It is great to be working with Monty again following his successful Lost Worlds series in 2015, this time on one of his great unfulfilled ambitions to follow sharks on the sardine run.” 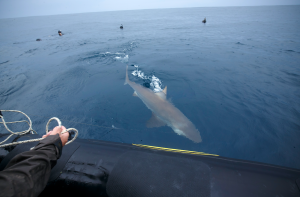 Halls will be in charge of a fleet of land-based 4x4s tracking the Sardine Run from the land, with underwater cameraman Doug Allen ready to capture images from the sea.

“Monty and Doug Allen are a great double act – one the wildly enthusiastic optimist, the other the wise old seadog who bides his time waiting for the perfect moment to leap into action,” said Dick Colthurst, managing director at Tigress.

“Together, they capture the fun of going on expedition where, experience dictates, things rarely run exactly to plan.”

Discovery is well known for its shark-related programming, which are a staple on Discovery Channel.

Since the late 1980s, Discovery has had an annual Shark Week, which is programmed with shark-themed fare.