Global advertising revenues will increase this year and Europe’s crisis-hit countries are recovering, according to ZenithOptimedia.

The media buyer added that internet advertising is driving the global growth and has brought forward its forecast for when it overtakes TV as the dominant medium. Zenith now says TV will fall behind internet ad revenues in 2017. 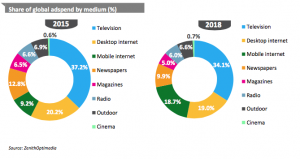 “Even Greece is expected to enjoy annual growth of 3.9%,” Zenith said. “These markets have room to growth rapidly for several years to come: after all, they have a lot of ground to make up.”

In terms of overall global ad growth, Zenith says that the ‘quadrennial effect’, whereby there are US elections, Summer Olympics and European Football Championships, will outweigh the challenges presented by economic slowdowns in Brazil, China and Russia.

It added that fast-growing markets in Africa, Asia and Lat-Am will help drive the overall acceleration in 2016 ad revenues of US$579 billion, a 4.6% uptick year-on-year.

“Rapid growth from countries that are relatively new to the international advertising market, combined with a resurgence of established markets that were damaged by the financial crisis, will keep the global ad market on track for healthy growth for at least the next few years,” said Jonathan Barnard, head of forecasting at ZenithOptimedia.