Take up of video-on-demand services in the UK is tracking at 20% of the population, below the global average of 26%, according to new data from Nielsen.

Nielsen reported he finding in its Global Video-on-Demand Report. It noted that 69% of people in the UK pay for some form of TV with Sky and Virgin the most popular options.

The ratings and research specialist said the figures prove that the cord-cutting threat has been overplayed, in the UK at least.

“In Britain, the cord-cutting wolf is being kept from the door by a combination of a relatively smaller appetite for on-demand content and traditional pay TV’s superior content library in terms of live sports and the earlier availability of premium TV series and films,” said Terrie Brennan, Nielsen executive VP of digital for Europe.

The report said that 51% of Britons that have internet access watch some form of VOD programming, which lags the worldwide average of 65%. It added that 35% watch VOD at least once a day, compared to 43% globally. 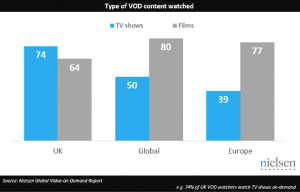 What UK consumers are watching on-demand also contrasts with the rest of the world. TV wins out, with 74% more likely to watch TV fare than feature films on-demand.

“The increasing popularity of online-only TV services will continue to put pressure on the likes of Sky and Virgin, but a wholesale replacement of these traditional subscription players is unlikely,” Brennan said.

She added: “For most UK viewers, online VOD and traditional subscription services are complementary, so we’re more likely to see “cord shaving” – consumers choosing slimmer subscription packages from the traditional players, rather than cancelling them outright.”