Youth-skewing channel BBC Three has gone off-air and was an online-only service from noon today in a move the pubcaster said makes it “the first TV channel in the world to make the switch from linear broadcast channel to online-first destination”. 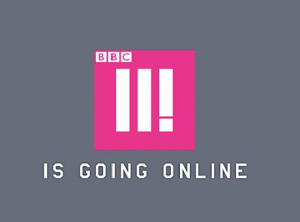 The contentious move online came amid deep BBC cost-cutting and following an unsuccessful campaign from industry professionals to keep the linear channel alive.

“Ultimately it comes down to content and BBC Three needs to focus on original content which is what it is doing with comedy. It’s all about creating the next biggest blockbuster,” said Paolo Pescatore, director, multiplay and media at CCS Insight.

“It will not be easy but BBC3 will now have to raise its profile to stand out from the crowd, hence why it is will be important to have a strategy across all social platforms to ensure a deep engagement with users.”

Speaking at an event in London last month to preview the reinvented BBC Three, channel controller Damian Kavanagh said: “We’re reinventing our offer for young people, but I want to be clear that this is just the start.

“We will iterate, refine, adapt and I ask that you guys come on this adventure with us. Some things won’t work, but we have the capability to change tack very, very quickly; this is what’s most exciting about the new BBC Three.”

“We have a brilliant track record on BBC Three for making purposeful content that resonates with people, and we will build on this.”

“The reality is that younger audiences, particularly those in the 16-34 age bracket BBC3 serves, are leaning more and more towards bite-sized on demand content,” he said.

“Today, as the switch is flipped and BBC3 becomes online-only, the broadcaster’s new ‘Daily Drop’ content section will not be pitted against established broadcast channels or VOD services in this regard. Instead, it will be going head-to-head with current heavyweights in the short-form content environment – YouTube and Facebook Video.”

The linear BBC Three switch-off follows a report over the weekend by Radio Times, claiming that senior BBC strategist are considering merging BBC Three and Radio 1, and appointing a single ‘youth controller’ to oversee all platforms aimed at 16-34 year olds.

A spokesperson for the BBC said: “Everyone knows we are looking at the BBC’s structure to make sure we are fit for the digital age. There has already been a lot of speculation about our future shape and there will no doubt be plenty more, but when we’ve got something to announce we’ll do so.”