Analysts have said Netflix is an expensive proposition in most developing markets, and that it is likely to amend its pricing in the medium term.

Digital TV Research has analysed Netflix’s pricing in international markets and compared it against the average pay TV revenue per user per month (ARPU). 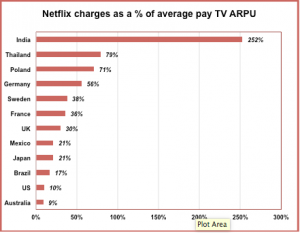 While the streaming service is seen as a low-cost option compared to traditional pay TV in most Western markets, that is not the case in several other international territories.

In India, for example, a Netflix sub costs two and half times the amount of its pay TV equivalent.

He added: “Therefore prices are likely to be tweaked in the mid-term, but the rates will appear high in the short term.”

Murray highlighted the Indian example. “Netflix charges INR500-800/month in India whereas competitors such as Ditto (INR299/month, and owned by local media powerhouse Zee) and HOOQ (only INR199/month) are considerably cheaper.”

In Thailand a Netflix sub costs around 79% of a pay TV charge and in Poland it is 71%. In developed pay TV markets such as the US, UK and Australia, meanwhile, it is a considerably cheaper option relative to pay TV, costing 10%, 30% and 9% of a traditional pay TV monthly charge respectively.

“So, Netflix is asking Indians to pay two and a half times as much as they would for the average pay TV subscription,” Murray said. “At the other end of the scale, Australians would be forgiven for thinking that Netflix is cheap as its fees represent only 9% of the pay TV ARPU.”

Netflix announced its huge 130-country launch at the CES trade show in January.

“Many were surprised when Netflix announced its global pricing strategy at CES,” Murray said. “Hastings explained that the company was trying – at least initially – to target the elite in developing markets.