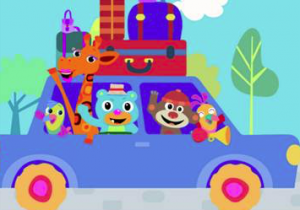 SVOD services have both made significant impact on the kids TV commissioning space in recent years, and HMH said its expanded offer would be “almost double” that of Netflix.

The 58 videos are part of six original short-form series rolling out on the platform in the next six weeks.

These are Moonlight Storytime, which is a series of animated classic fables told with a modern-day twist; Jingle Bilingual (pictured); a musical, animated series teaching kids English and Spanish; A Rhino Named Paul, about a haphazard and child-like rhino; Recycled Superheroes, which teaches kids how to make superhero costumes from recyclable materials; arts and crafts-themed Get Crafty; and Let’s Go to Work, which features the working lives of everyday people.

Curious World’s owner, HMH, claims to have gathered a library of more than 600 acquired or in-house produced videos since its launch in October 2015. It has an internal development team with creative partners from companies such as Bix Pix and CloudKid, and has bought shows from National Geographic Channels International, Storybots, Caspar Babypants and PBS Kids.

“Like all of our curated content, our original videos are rooted in the science of learning, built by experts, and designed to engage young learners with developmentally-appropriate, engaging stories and characters,” said Caroline Fraser, VP of programme development and acquisition at HMH.

Parent HMH is a global learning trade and educational publisher based in Massachusetts. It publishes the Curious George brand.