ITV-owned formats giant Talpa has confirmed a deal with China’s Zhegiang that covers several seasons of The Voice, and will see the pair co-develop hundreds of new variety shows.

The first reports of a Talpa-Zhegiang agreement came to light last week when the Chinese company issued a local release. The news was then first picked up internationally by the Reuters news wire. 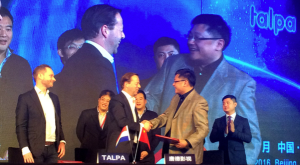 The deal was finalised and signed yesterday in Beijing and further details of the agreement have emerged.

Zhejiang make three more seasons singing format The Voice, known locally as The Voice of China, under the terms of a US$60 million deal with Talpa.

The Chinese firm will also put US$50 million into a JV with Talpa and the funds used to work up new variety shows for the local market.

“I am delighted to announce our exciting new partnership with Zhejiang,” said John De Mol, founder of Talpa. “I firmly believe that we have found a great new business partner with whom we look to expand our business in Greater China and beyond.

“The Chinese television landscape has undergone a transformation over the past few years and China now has the capacity to produce big entertainment shows. We are thrilled to be bringing fresh ideas to the fantastic Chinese audience and by their massive support for The Voice of China.”

Talpa has been active in the Chinese market for several years, setting up local partnerships and seeking to sell its formats into the huge market.

Last year it launched reality show The Fifteen of Us on the Tencent streaming platform.

Tags: Talpa, The Voice, The Voice of China, Zhegiang