Cord cutting in the world’s high-income pay TV markets will have a direct impact on the content spend, meaning channels and content producers will increasingly look to other routes to reach consumers, such as direct-to-consumer services. 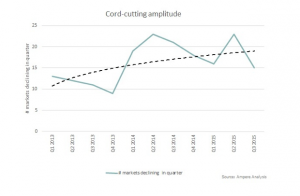 The findings were contained in the latest cord-cutting research from UK-based media research house Ampere Analysis.

It said that while globally pay TV is experiencing strong growth, much of this is coming from lower value markets. China, with its huge population, also skews the global pay TV growth numbers.

The US and several other established markets, meanwhile, are continuing to feel the impact of customers cutting the cord. “Globally, pay TV is still growing strongly, but there is a fundamental value shift away from high income Western markets.”

Ampere said that in that environment operators will double down on costs, with a knock-on effect on channel providers and content owners. That will lead to content companies embracing direct-to-consumer alternatives in the markets where costs are being cut, likely as part of a range of services within their offering.

“More and more traditional content players will look to replicate Netflix’s model on a global scale, supplementing their channel businesses with Direct-to-consumer options in markets where pay TV operators push back on costs,” Ampere said.

The likes of HBO and Discovery Communications and its subsidiary Eurosport (pictured) have opted for D2C alongside their traditional pay TV services.

“The heyday of traditional pay TV has passed, not because there is no growth, but because there is an increasing value shift to lower-cost markets and platforms,” said Guy Bisson, research director at Ampere Analysis.

He added: “Channels and content owners must look to new business models to sustain growth. Direct-to-consumer brands that can scale globally must now become a part of all channel groups’ portfolios.”