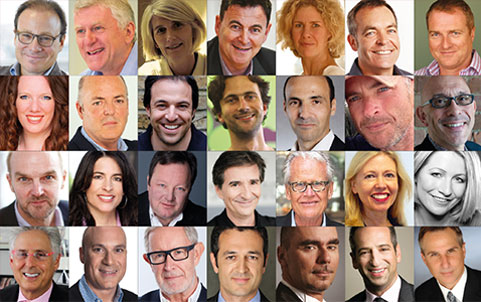 There was a buzz around ultra-high definition television coming into 2015, but did the medium have the impact many expected? For Naked Entertainment’s Simon Andreae (below left), it was a resounding no. “How many people got a 4K set for Christmas? Not many,” he says.

MoMedia boss Lucas Bertrand has a similar view. “It’s not even close to breaking through,” he says. “It’s still a bit of the Wild West for delivery formats. Keeps selling the TVs though…”

Whizz Kid Entertainment’s Malcolm Gerrie saw 4K television “dribbling through”, though he expects it to break in a bigger way in the future, while Lee Morris, managing director of SS-GB prodco Sid Gentle Films, says: “I’m sure that 4K will arrive, but no-one is really pushing us to produce in the medium at the moment.”

Others such as Blue Ant Media, Discovery Communications and Pioneer Productions have already made big 4K production commitments that are already resulting in UHD specials and series coming through.

“It’s an interesting question that depends on which world you are in,” says Pioneer’s Kirstie McLure. “With my Korean hat on – Pioneer has a JV in Korea, Buzz Media – the answer is a resounding yes: we are now shooting and mastering two wildlife series in 4K. But with my UK hat on – it’s a fat no. However, I suspect we will see a gradual move towards more 4K in 2016 in the wildlife and drama arenas.”

Amazon Instant Video’s Chris Bird says all of the SVOD firm’s UK productions, including new effort The Collection, will be shot in 4K (and it’s a similar story at Netflix), while Peter Higgings from Renegade 83 says that while it hasn’t made a dent on the consumer front, “everyone on the inside is talking about it”.

The medium has completely convinced some. Woodcut Media CEO Kate Beal says: “2015 proved that 4K is here to stay as more and more producers started adopting the format. It’s not the technology fad that 3D turned out to be.”

She says camera prices are now reasonable, “so there is no barrier to entry out on location”, though post-production remains a longer process than with HD or SD.

“Once this part of the process is smoothed out, sped up and made more economical, we’ll see 4K not just break through, but dominate production from now on,” she adds. “Until the next new big format that is.”

TV’s Big Questions: which platform made the most impact in 2015?

TV’s Big Questions: has M&A been positive for the industry?