There are few things as tempting in January as Miami especially when you’re leaving the sub zero temperatures of London and when you add in the Natpe TV industry market to boot it’s hard to say no.

This was my third consecutive visit to Natpe since it and Realscreen sensibly stopped competing over the same few days in January. This now enables hardened travelling TV salesmen and women an extended business trip to crack the US across both events.

The two markets couldn’t be more different: whereas Realscreen is very US cable TV-focused, one of the things I like about Natpe is how random the experience can sometimes be. In the hectic lobby of the Fontainebleau Hotel you meet people from all walks of life in the industry as you fight your way through the human tsunami.

There’s an abundance of Latin American programme makers but also digital producers, app producers, branded content producers – pretty much every kind of producer you could wish to meet.

Getting a meeting isn’t hard to achieve, but getting somewhere to sit is, and every meeting begins with a game of musical chairs as you try and find somewhere to hold your discussion. That is, unless you’re a bigger studio or distributor, who host meetings in suites in high rise towers or cabanas by the pool.

However, even these have their downside with the substantial queues forming to use the elevators making a suite visit in the Tower a monumental achievement, and surprising inclement weather making the cabana meetings a feat of human endurance.

Natpe seems to be ever evolving. Last year I felt the trend was towards the social influencers with the debates being lead by the likes of Vice Media, Maker Studios and Fullscreen. Those guys seemed less visible and shiny this time around – 2016 felt more focused on a thing called television. Who knew TV would be back in fashion!? Apparently ratings are up in the US market, as is ad revenue, and ‘cord cutting’ is being reversed.

The market floor was dominated by stands from TV distributors all around the world looking to sell into the US and Latin American market, and the conference and shop floor was full of US buyers.

The whole atmosphere is perhaps a little more casual and less regimented than Realscreen, but for that it should be applauded as better meetings can sometimes happen in a more relaxed atmosphere.

The conference sessions bizarrely were not in the Fontainbleau – where the rest of the conference was – but were moved to the Eden Roc Hotel up the road, and as expected the debates in the conference centred on certain key current industry themes. 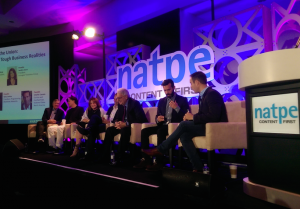 One raging debate focused on whether scripted is still in the ascendancy or at the peak of its powers. I think the consensus was that scripted still has plenty of oil in the tank and was being further fuelled by the new market players in OTT such as Amazon and Netflix.

One bud of hope for those of us in the non-scripted world was the recent success of Netflix procedural crime documentary series Making A Murderer, which seems to have inspired a whole wave of demand for similar ‘true crime’ style projects.

Not surprisingly, new technology always features highly and so I was a keen observer of the ‘What’s Real About Virtual Reality’ session. I’m confident VR isn’t going to be a flash in the pan like 3D, but it’s clearly going to be an enhanced experience rather than a TV one. Other tech advances such as GoPro and 4K also got a decent airing.

I don’t want to say it too loudly in case it catches on, but I think we were the only UK- and US-based indie in the village. It makes you feel special and gives you a clear run before the deluge of hundreds of competitive producers soon to be descending on Washington for Realscreen.

Would I come back to Natpe again? Hell, yeah! What’s not to like about an ever-evolving market that moves with the times and offers up a variety of opportunities for buyers and sellers alike of all forms of media. Oh and did I mention it’s in Miami. In January.