NBC has revealed what it claims to be viewing numbers for key Netflix series.

The US broadcast net hosted a press lunch at the Television Critics Association tour that it dubbed a ‘reality check’ of the current TV landscape.

NBC’s president of research and media told reporters at the lunch about further Symphony findings.

Aziz Ansari’s Master of None, which is produced by NBCUniveral, had 3.9 million views, drug kingpin drama Narcos (pictured) had 3.2 million views, while comedy drama Orange is the New Black (right) registered just 644,000. 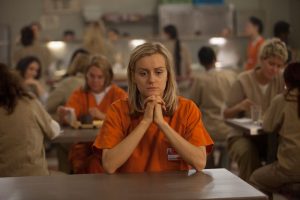 Netflix is notoriously shy of breaking out any viewing data, reportedly even withholding information from the producers and talent working on its original series.

The streaming firm, which has always said it measures success in subscriber numbers and the number of hours people watch (both of which are broken out), told TBI that it had no comment on the Symphony data.