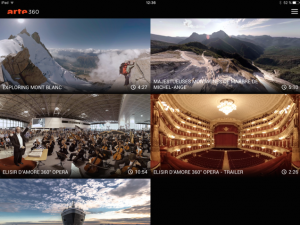 Available on iOs and Android devices, Arte said the app aims to open up 360-degree and VR experiences that allow users to virtually be part of Arte content, from a point of view they can select.

Those equipped with VR headsets, or Google Cardboard glasses, will be able to take advantage of the VR elements.

Several Arte 360° productions are already available from the Google Play and Apple App Stores, including Polar Sea 360, +/- 5 Meters, a dive into the ocean with photographer Joe Bunni.

The Edge of Space, a stratospheric travel show with high altitude helium balloons, shot in summer 2015, will also feature.

Directed by Deep Inc.’s Thomas Wallner, the show is an Arte GEIE copro with Canadian Space agency ASC and its French equivalent, Cnes. It follows a 42 kilometre-high journey into space in an air balloon.

Upcoming programming that will be added to the app includes new 360° content for I, Philip, a shortform web drama from Okio Studio and St Georges. The Philip K. Dick-inspired project follows a human-like android called Phil.

Tags: Arte, i, Philip, Polar Sea, The Edge on Space