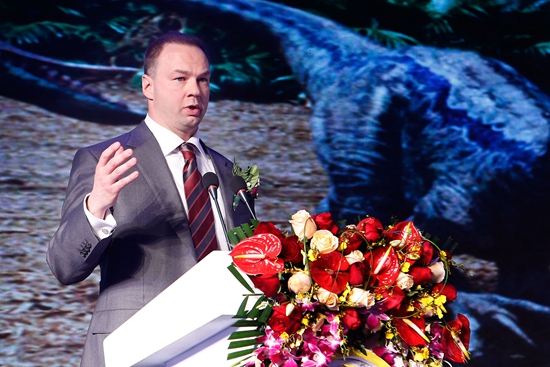 China’s Dalian Wanda is to acquire US studio Legendary Entertainment for US$3.5 billion.

The Chinese conglomerate confirmed it had entered into a ‘merger agreement’ that would see it pay around RMB23 billion in cash for full control of Legendary.

Previous investors such as Japan’s SoftBank and investment group Waddell & Reed are selling their stakes.

Legendary founder, CEO and chairman Thomas Tull (pictured) will remain responsible for day-to-day operations at the studio, which is best known for feature films such as the Batman trilogy, The Hangover movies, Man of Steel and Jurassic World.

“Together, Wanda and Legendary will create a completely new international entertainment company,” said Tull. “There is an ever growing demand for quality entertainment content worldwide, particularly in China, and we will combine our respective strengths to bring an even better entertainment experience to the world’s audiences.”

Once the deal is complete, Dalian Wanda will look to build Legendary in China, while taking the company public and pairing it with Wanda’s in-house production assets.

“The acquisition of Legendary will make Wanda Film Holdings Company the highest revenue-generating film company in the world, increasing Wanda’s presence in China and the US, the world’s two largest markets,” said Wang Jianlin, chairman of the Wanda Group and China’s richest person.

“Wanda’s businesses will encompass the full scope of film production, exhibition and distribution, enhancing Wanda’s core competitiveness and amplifying our voice in the global film market.”

Wang has been looking to acquire a US studio for some time, and was reported to be close to a deal for DreamWorks Animation last year. Dalian Wanda is already the majority shareholder of film theatre operator AMC Entertainment.

News of the Legendary deal first emerged earlier this month.