Canal+, Watch Next on board Elvis toon 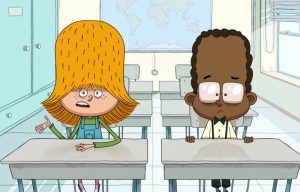 I, Elvis Riboldi follows the adventures of an energetic and impulsive boy, who lives in a small city with his best friends. It targets 8-12s and was adapted from a book series by art collective Bono Bidari.

The project recently received development funding from the Institute of Cultural Enterprises of Catalonia. With Canal+ and Watch Next on board, production is set to begin next year.

I, Elvis Riboldi was first pitched the 2014 edition of Cartoon Forum, with the now-defunct Edebé Audiovisual Licensing leading the project. After that company went under last year, two of its producers launched Peekaboo and took on some of its catalogue and development slate, including Elvis.

Watch Next, meanwhile, is the Paris-based production company of former Télé Images chief and Zodiak Kids executive Alessandri. It launched last year, and scored a first programming agreement with France Télévisions in July to develop another 52x11mins toon, Nate is Late.