The digital series will examine the power of social media and how young people are using it to effect positive change around the world.

“Social media has amplified the voice for my generation around the world and changed the way that we communicate,” said Turner. “I am a huge advocate of social media and thrilled to be given the opportunity to delve deep into its influence and impact on society at large.”

The series will be produced by GroupM Entertainment, the production arm of media agency GroupM, and UK indie Broad Bean Media.

Huffington Post founder Arianna Huffington said: “I’m delighted that, as part of our “What’s Working” initiative to reimagine journalism with an emphasis on solutions, #PowerShift is putting a spotlight on real people using social media to change the world, in a way that’s both inspiring and entertaining.”

AOL, now owned by Verizon, bought The Huffington post in a US$315 million deal in 2011 and the new series will be hosted all 15 global editions of The Huffington Post. It will also be hosted on the platform AOL On video platform. 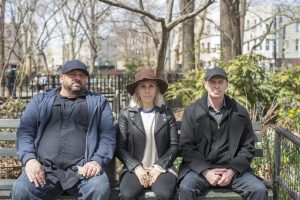 AOL has been pushing more heavily into original content, ordering series including Beyond the Horizon with Jared Leto and Park Bench with Steve Buschemi (pictured).

Hamish Nicklin, Managing Director of AOL UK, said: “#PowerShift will be a fascinating series, commissioned out of the UK, and highlights AOL’s commitment in creating premium video content that delights consumers and enables brands to connect with audiences across a fragmented digital ecosystem. We are thrilled to announce the series at AOL’s event at the IAB Digital Upfronts.”