Syfy has cancelled Defiance after a three-season run.

The multiplatform show, which follows a town in which humans attempt to live peacefully with aliens in a post-apocalyptic near future, is produced by Universal Cable Productions, but has now been pulled. 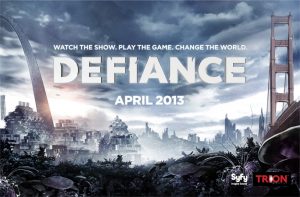 The first season, ordered as Syfy upped the amount of original programming it was making, gave NBCUniversal-owned cable net its best premiere ratings in almost a decade.

In a statement, the channel said: “Defiance was a truly groundbreaking series, delivering an immersive, cross-platform experience that transcended the television screen in a way that viewers had never seen before. We are incredibly proud of the work of the extraordinary cast, writers, artists and designers – and especially showrunner Kevin Murphy – who together brought the rich world of ‘Defiance’ to life over its three season arc.”

Murphy said: “I got to collaborate with a group of stunning artists operating at the top of their game, and together we built a world. Because of that, there is no room for anything other than joy in my heart.”