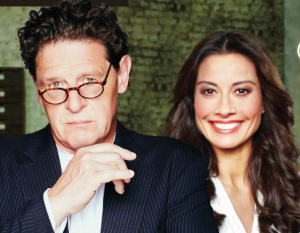 He will attend an event held by distributor Zodiak Rights on Monday, October 5, and meet buyers and press.

White is pictured above with Humble Pie presenter Melanie Sykes.

In his new entertainment format, White judges dishes that amateurs create. This comes after a ‘ruthless’ format element in which contestants critique the others’ food.

Should any contender think their dish will be ranked worst by White, they can cash out for small fee.

The fixed-rig format sees men from all walks of life put through tests to which the SAS (the British special forces) subjects its recruits.

Show stars Brian Gleeson and Ruth Bradley will be in attendance.