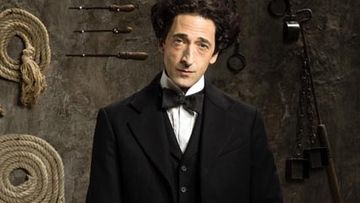 A raft of A-list Hollywood talent have signed up to Breakthrough, a new science series for Fox’s National Geographic Channel in the US.

The series will look at scientific breakthroughs and the scientists behind them.

Paul Giametti (Sideways) will narrate and direct an episode entitled More Than Human, about real-life cyborgs, and Brett Ratner (X Men: the Last Stand) and Adrien Brody (Houdini, pictured) are making an instalment of the series about brain-related scientific discoveries.

A Beautiful Mind director Ron Howard’s contribution will be an episode about ageing and Angela Bassett will direct and narrate another looking at water shortages.

The series launches on Nat Geo in the US on November 1.

Earlier this week, Nat Geo announced another series backed by Hollywood talent, a new season of Years of Living Dangerously, the eco-doc. David Letterman, Jack Black, James Cameron and Arnold Schwarzenegger are all on board that show.